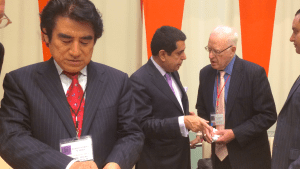 The International Shinto Foundation (ISF) advances understanding and public appreciation of Shintoism and Japanese culture, interreligious cooperation, and the import of our work for the United Nations.

ISF is a non-political, non-sectarian organization aiming to further appreciation of the unique intellectual and cultural contributions of Shintoism, the value of interreligious cooperation, and the import of the United Nations.

Those involved in establishing ISF shared the belief that without study, which takes account of Shinto, a true understanding of the Japanese people and Japanese culture will remain inaccessible. Having enjoyed more than two decades of global philanthropy, ISF was originally established in 1994 as a voluntary organization to promote the academic and cultural study of Shinto and to deepen understanding of Shinto internationally. It was registered as a not-for-profit public charity in 1996 by the State of New York and certified as an non-profit organization by the Governor of Tokyo in 2000.